Artist Jim Shore had a love of American folk art instilled in him at an early age, along with an appreciation of intricately hand crafted quilt designs. Stepping away from his engineering career he combined these two loves as a budding professional artist. From humble beginnings with a small group of pieces his work became so sought after that running his Designs Americana company encroached on much needed time for developing new ideas.

In 2001 he entered into an agreement with Enesco to create the Heartwood Creek line, allowing him to focus on crafting intricate designs on a wide variety of canvases – for every sculpture created is a new canvas on which to experiment with patterns and colours. He estimates having created over 3,000 Santas since the start of his career.

The Disney Traditions line celebrates another successful partnership for Jim Shore. His artistic detailing has brought a new look to many well beloved Disney characters over the years. These pieces are available on four continents from retailers and Disney theme parks.

Other fan favourites like Winnie the Pooh and the Peanuts characters have followed along from the Disney collection. One of the most recent additions is the Beatrix Potter collection modelled after the beloved The Tale of Peter Rabbit.

Over 70 different Jim Shore products are in stock, so list is divided into different categories for easier searching. 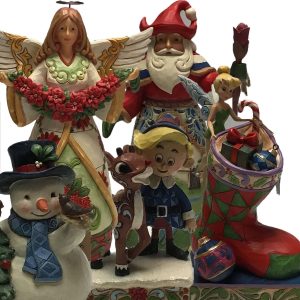 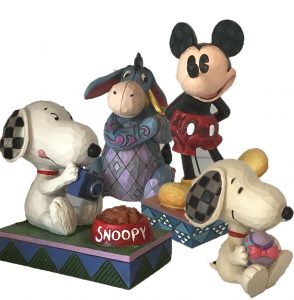 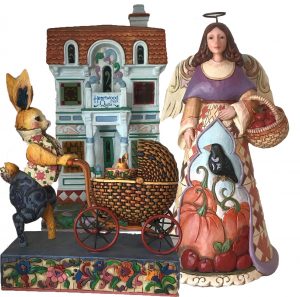 Originally designed and built by Intrigue Media. Design alterations by Donna J. Harris.
Additional accessible formats for this information are available upon request. Contact us for more information.