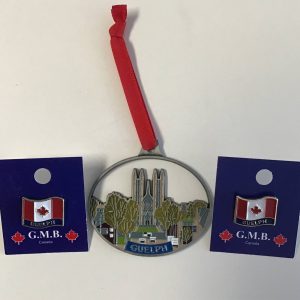 On this day 194 years ago the city of Guelph was born. It is also known as The Royal City, having been given one of the (up until that point unused) family names of the British Royal Family. George IV was from the Hanovers, descendants of the Guelfs.

Founded on St. George’s Day of 1827, Guelph is considered to be one of the earliest planned towns in Canada (while predating the country’s confederation by 40 years). John Galt, Superintendent of the Canada Company, laid out a plan for the new settlement. It spread outward from a point on the banks of the Speed River, reminiscent of the layout of city centres across Europe.

The Church of Our Lady became the Basilica of Our Lady in 2014. It has been a focal point of the Guelph skyline for generations. Construction of the current building began in 1877, taking almost 12 years to complete. The towers on either side were later additions, being finished in 1926. It seemed a fitting choice for a Guelph centric enamel on pewter ornament.

Recent Posts
Search Our Site
Connect With Us
Home | About | Products | Blog | Contact | Shop | Privacy Policy | Sitemap
Built By Intrigue Media. Additional accessible formats for this information are available upon request. Contact Us for more information.
Copyright © Candies of Merritt. All Rights Reserved. 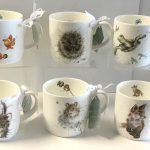 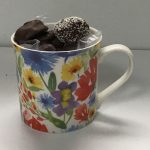